Drive through the Motte Servolex hamlet, the Chemin Count Marin and at a turn you will face a cast iron gate at the entrance to the domaine. The buildings are not yet visible to the visitor Alphonse de Lamartine described the surroundings in 1871 in the following text:

« The house is situated on a northern side of the valley which runs through meadows and marshes from Chambéry to the Bourget du Lac. The dark high wall from the Mont du Chat spreads and increases its roots out to the valley; its rivers and water fountains, its long shades throw themselves into the wide and rocky water-falls of the Laisse.
Beyond, the green and wooded plains, on which the frosted towers of the Servolex appear,now belong to my nephews, formerly belonging to the de Maistre nephews. »

Let’s go back in time and look at the history of this great Lamartine abode. 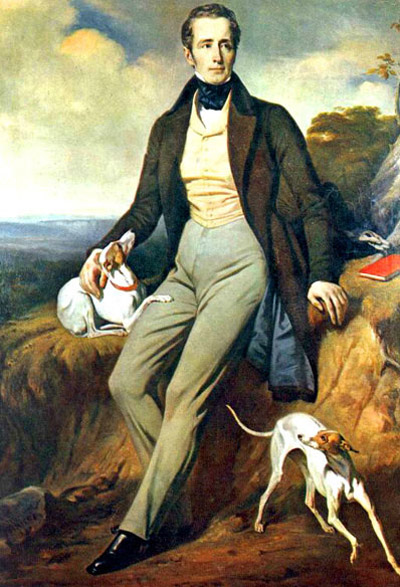 The castle features from 1600, in Local history, its owner, Pantaléon Vissod is a Secretary of State and a Magistrate
After the Revolution, the Vignet family buys the domaine. They reside from 1818 to 1882. Pierre-Louis_Marie de Vignet (1733-an V) had lived in Chambéry from childhood. He marries on the 18th October 1778 Marie-Christine de Maistre, Joseph and Xavier de Maistre sister (her statue is now placed at the foot of Chambéry Château) .Two sons are born from this union: François-Xavier and Louis, the friend of Alphone de Lamartine.

His brother Louis, appointed Baron in 1821, chose a diplomatic career.
Louis de Vignet and Alphonse are long-time friends: they met at the Jesuit College in Belley. Louis welcomed him several times until Césarine’s death in 1824 from Tuberculosis.
From this date, when visiting Savoie, Lamartine resides at Aix-les-Bains. Nevertheless, the poet keeps warm memories of Servolex where he lived intense moments.

François-Xavier de Vignet completely transformed the château creating its present form. The building is composed of a central area surrounded by four round 3 floor towers. Outside, the large gallery held by four pillars and two forecourts covering 2 levels provide a pleasant balcony for the high floor.

François-Xavier de Vignet’s daughter, and Nicolas-Aymons-Marie-Xavier’ sister, Alix (1828-1970) married Baron Eugène de Morand de Montfort in 1844. Her parents, ruined by the Revolution, found refuge in the Château de Servolex. Eugène died here on 25th September 1879. His widow, the Baroness Morand de Montfort, lady in waiting for the Queen of Sardingnia, is forced to the château to M. Gonet in 1882.

In 1895, Lyon shop keepers, the Barral family reside in the Château. When Mme Rousseau, Mr Barrals’s daughter dies, the Château is sold to M. Pierre Gaillard, who died 2009.

Inside its immense park, there is a car park situated just after the gates. The ailing trees have been felled, but there remain exquisite examples of Araucias and Ginkgo biloba
Thanks to local craftsmen, the has regained a fine stature

Let us take another look at the « confidences » from de Lamartine .

« If I lived another century, I would never forget the days…..that we spent during a Summertime…..with my friend, Louis de Vignet in the small Servolex Castle. The fields were our salon.. Sometimes young Fir trees behind the Mont du Chat foliage …sometimes a tall alley of bushes at the Servolex garden, this alley forming a balcony around the greenery and tall vines entwined with walnut trees…»

The Servolex domain is ready to write a new page of History for the 21ème century.

We use cookies on our site to give you the most relevant experience. By clicking "Accept All", you consent to the use of ALL cookies. However, you can visit "Cookie Settings" to provide controlled consent.

This website uses cookies to improve your experience while you navigate through the website. Out of these, the cookies that are categorized as necessary are stored on your browser as they are essential for the working of basic functionalities of the website. We also use third-party cookies that help us analyze and understand how you use this website. These cookies will be stored in your browser only with your consent. You also have the option to opt-out of these cookies. But opting out of some of these cookies may affect your browsing experience.
necessary Always Enabled
Necessary cookies are absolutely essential for the proper functioning of the website. These cookies provide basic functionality and security features of the website, anonymously.
functional
Functional cookies help to perform certain functions such as sharing website content on social media platforms, collecting feedback and other third-party functionality.
Performance
Performance cookies are used to understand and analyze key website performance indices, which helps to provide a better user experience for visitors.
analytics
analytical cookies are used to understand how visitors interact with the website. These cookies help provide information on metrics of number of visitors, bounce rate, traffic source, etc.
Advertising
Advertising cookies are used to provide visitors with relevant advertisements and marketing campaigns. These cookies track visitors across websites and collect information to provide personalized advertisements.
others
Other uncategorized cookies are those that are being analyzed and have not yet been categorized.
Save & Accept
Powered by